Texting while driving is one of the more recent evils. It’s a hot topic, with everyone from Oprah to AT&T advocating how horrible it is. Here’s a documentary, The Last Text, from AT&T:

I’ve been suspicious of this communal rage against texting since the beginning. It requires only a little critical thinking. Traffic fatality rates are down dramatically over the last 20 years. In that same time period texting has seen explosive growth. Graph below is from a Virginia Tech study. 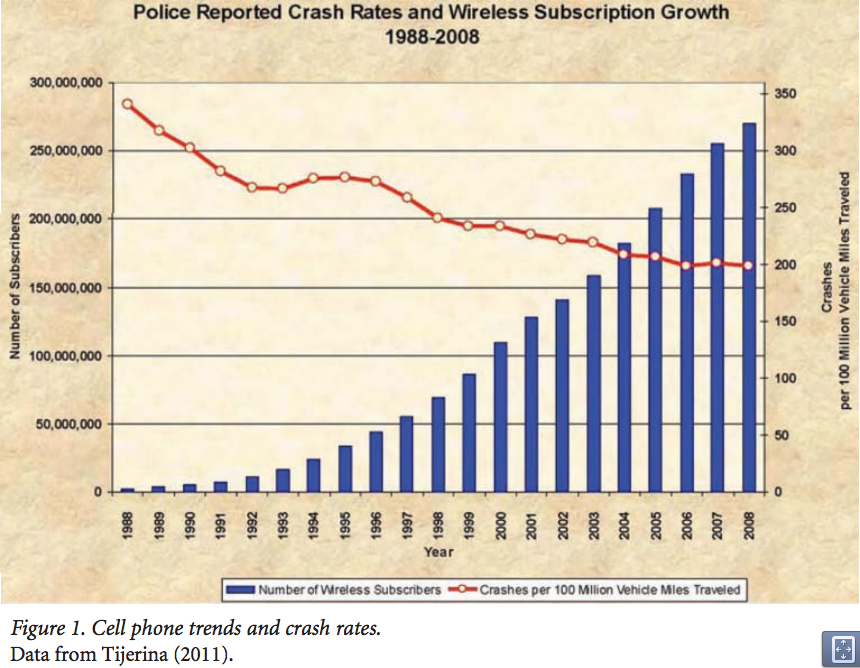 If texting while driving is so dangerous, traffic fatalities should have increased. It doesn’t add up. The texting and driving deaths graph/chart above should make you think. And it’s not just fatalities. The graph shows crash rates.

I watched the above documentary and right away I noticed something. The first girl mentioned in the video was ejected from her vehicle. So was another girl. Having worked as a New York car accident lawyer, I know that’s odd. People normally are not ejected from their vehicles in accidents. Unless …

Well, let’s take a look at something from the video. Here’s a part of the accident report. The white highlighted area is from the video itself. I added the blue arrows. 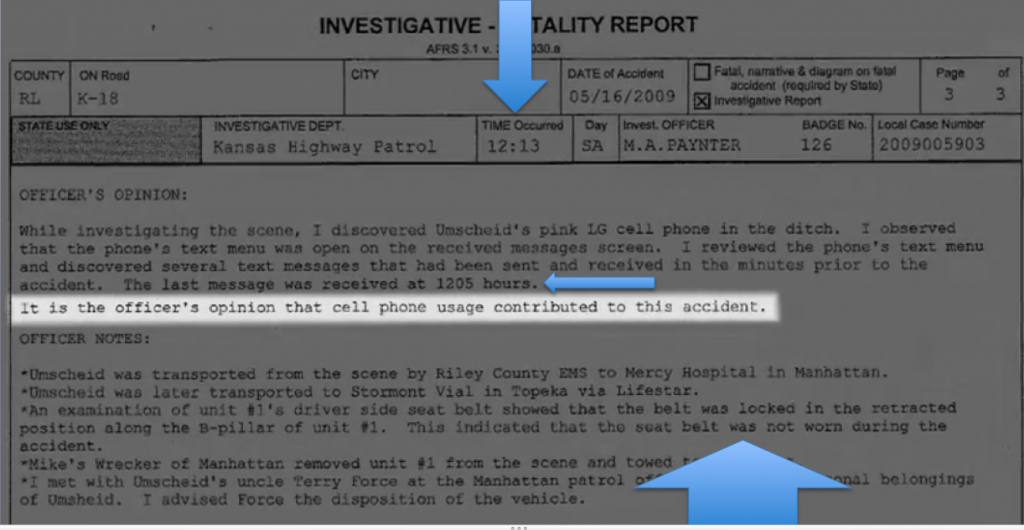 The highlighted portion is the officer’s opinion: “cell phone usage contributed to this accident.” What’s not highlighted?

what the arrows are for. First, the accident occurred at 12:13.

Second, the last text message was received at 12:05.

If the last text message happened eight minutes before the accident, that certainly calls into question whether texting was the real cause. Read the officer’s language again: “contributed to this accident.” He didn’t say “caused”. The hard truth is that we simply don’t know what caused the accident.

we do know what killed Ashley Umscheid, and it is a well established cause of traffic fatalities.

She wasn’t wearing her seat belt. That’s why she was ejected from the vehicle.

Why does the video focus on what might have caused the accident instead of what clearly caused her death?

In the first accident shown, it is mentioned that the girl’s face was disfigured from sliding down the roadway. That makes it sound like she was ejected from the vehicle. And indeed at least one story indicates she was “partially ejected.” 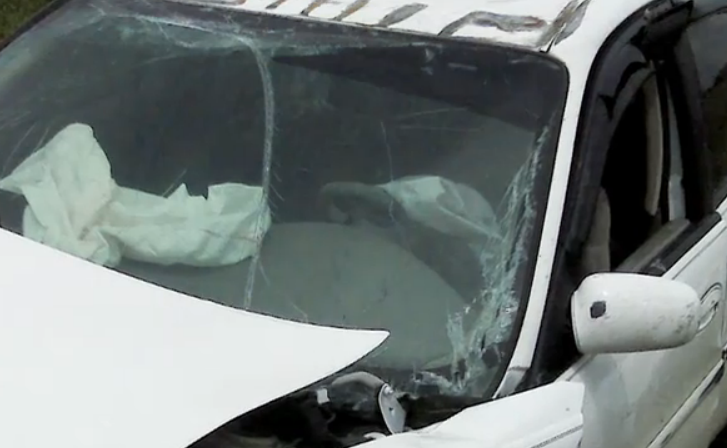 Notice that the air bags are deployed and the car door is still shut. She was ejected through the window. This generally happens when you’re not wearing your seat belt.

We can all agree that it’s better for drivers to have their complete attention on the road. Distracted driving is a problem and does cause accidents. But there are all kinds of distractions, including music, food, conversation within the car, or even just random thoughts. In the all-encompassing drive for safety and security, we could ban drive-thru restaurants, car stereos, vanity mirrors, even passengers.

So many of these deaths are caused by head injuries. Perhaps we should all wear helmets in our cars, like race car drivers do. That would save a lot of lives. Should we have a helmet law for car drivers and passengers? We require car seats for children even though they’re really no more effective than seat belts.

They who can give up essential liberty to obtain a little temporary safety, deserve neither liberty nor safety.

Statists use these bogeymen to create more laws, giving the government more power and taking away more of our liberty. I’m not talking about the narrowly framed liberty to text and drive (or drink and drive, speed, wear seat belts, or use the drugs of your choice). I’m talking about the broader liberty to be free from search, seizure and arrest.

Along the way, of course, government wastes our money by spending so much on police, prosecutors, courts and jails, all with little or no effect on our actual safety.

Think back to the founders of our nation. Ask yourself this question – What Would George Do? George Washington, that is.

If George Washington was stopped at a “traffic safety checkpoint”, he’d run the constable through with his sword and continue on his way. Maybe that’s an exaggeration, but Washington did have a temper. Of course violence against police is not the answer. But we should have policies that focus our police on the things that are important (like violent crime), and do all we can to keep them from harassing people in their everyday lives.

As citizens and voters, we all need to be wary of how statists use these bogeymen to distract us from what’s important. That’s how they take our liberty away.