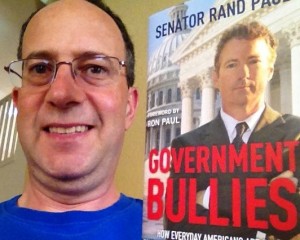 so excited about Government Bullies that I pre-ordered it on Amazon and posted a picture on Facebook when it arrived.

Then I read it.

There are two major flaws with the book. First, it plays loose with the facts. Second, it says things that run contrary to the liberty movement.

To be fair, Senator Paul is doing good things in Washington. He is fighting the good fight on issues like foreign aid. And the general direction this book points is also good – that the federal government has too much power which manifests itself in all kinds of nasty ways.

Government Bullies tells stories. As the subtitle puts it, these are about “everyday Americans” who have been “harassed, abused and imprisoned by the Feds.” The biggest story is John Pozsgai, who had problems with the EPA over the Clean Water Act and “wetlands.”

Paul gives a badly one-sided version of the Pozsgai case. That’s not surprising considering the sources listed in his appendix. One missing source is the Third Circuit Court of Appeals case upholding the Pozsgai conviction.

John Pozsgai’s battle … began in 1986 when he purchased a dump located near his home. … He sought and received all of the proper local permits …. The Pennsylvania Department of Environmental Protection gave the Pozsgais the go-ahead, including stating that their property was not on the National Wetlands Inventory map.

Throughout the story as told by Paul, Pozsgai appears to be not only innocent but also unaware there was any wetlands issue until the Feds started hauling him off to jail.

Here’s how the Circuit Court described the facts:

In April 1987, the U.S. Army Corps of Engineers received information that fill material was being dumped into wetlands …. At the time … John and Gizella Pozsgai were considering purchasing the property ….
In preparation for this purchase, Pozsgai hired … J.G. Park Associates to examine the suitability of the property …. J.G. Park … advised Pozsgai by letter …:

Based upon this investigation, it is my professional opinion that the entire site meets the criteria set forth by the Army Corps of Engineers as “wetlands.” … [A]ny further development … would have to be approved and reviewed by the Army Corps of Engineers, and … the Corps is most reluctant to issue permits for sites that have conditions such as this.

Pozsgai hired a second engineer, Ezra Golub, to evaluate the property. Golub, too, advised Pozsgai the property was wetlands and the Corps would have to approve any building. Seeking yet a third opinion, Pozsgai hired Majors Engineers, who concurred in the views expressed by the previous two engineers.

Wildly different: Three engineers warned him about the wetlands problem. And it gets worse. Pozsgai violated multiple orders from the Army Corps of Engineers and a Temporary Restraining Order from a federal judge.

That’s not how everyday Americans behave.

The Robert Lucas story suffers from the same problem – the Fifth Circuit’s 2008 decision is not listed as a source. Here’s some language from the case that was left out of the description in Paul’s book:

The Government presented evidence that Defendants, despite warnings from agencies … advertised the lots as “high and dry” and, when asked by owners if there were wetlands on the property, responded that there were none. … [T]he Government presented evidence of a completed fraud, indicating that the lots were not in fact dry, as Defendants had advertised, and that residents encountered sewage problems on their wet lots. At least one witness also testified that Wrigley or Lucas added language to her contract after she signed it; the language stated that she had been notified about potential wetlands on her property, while the owner testified that Defendants had not informed her of wetlands or shown her any wetlands maps when she was purchasing the property. Other witnesses testified that their land was wet and that their septic systems backed up. A witness who had asked Wrigley whether there were any wetlands on the property testified that it “would have made a huge difference” in her decision to buy the property if Wrigley had informed her that it contained wetlands. Although Defendants presented some evidence that the septic systems failed because lot owners had misused their septic systems, other lot owners testified that they only disposed of proper waste in their systems, yet the systems still failed.

The Lucas family doesn’t sound all that innocent, and a jury agreed.

Senator Paul is correct that the federal government has gone too far. All of the issues he presents are things that should be left to state and local governments. Congress has given the agencies too much leeway to create crimes out of regulations. The Pozsgai and Lucas families should never have had to deal with federal bureaucrats.

But misrepresenting the facts damages his credibility. The truth about what federal bureaucrats do is bad enough without misleading people.

The second flaw blindsided me. Discussing the Rapanos case, Paul writes the following:

Judge Zatkoff saw this sentence as too harsh, and for good reason. Earlier that same day he had overseen the trial of a local drug dealer – a true criminal – who was being sentenced to ten months’ jail time.

Anyone who follows Ron Paul knows he believes that the drug war is a failure, and in particular that it is not a federal issue. So it was shocking to see Senator Paul supporting the federal prosecution of a local drug dealer. He makes a similar reference to drugs in discussing the Gibson Guitar case. In his 2010 Senate campaign Rand Paul flip-flopped on the drug war, so this is disturbing and inconsistent with the liberty movement within the GOP.

The book isn’t all bad – he does a good job on the TSA, the Lacey Act and the regulation of raw milk. But the overall weaknesses detracted so much that they ruined the book. Paul also missed an opportunity when discussing the Sacketts’ problems with the EPA. They faced fines of $75,000 a day, and a permit process costing $270,000 with a two-year wait. These are more examples of federal excess that he could have related more effectively to make his points.

This is not Senator Paul’s only bad moment. Many were concerned when he endorsed Mitt Romney for president, though I personally gave him a pass on that. His recent support for Mitch McConnell’s reelection was even worse. McConnell is exactly the kind of big-government Republican the liberty movement needs to bounce out of Washington.

Despite these bumps in the road, Rand Paul is still the clear leader of the liberty movement within the GOP. Of course he’s not perfect. I remain optimistic that in the long run he may be a better messenger for the liberty movement than his father. But so far he’s not a better author. For his next book, hopefully he will consider the facts on both sides and then deliver a more honest and compelling argument for liberty.

For another opinion of the book, see the Washington Times. So far I have not seen any other thorough reviews, which is a bit surprising.