Some of those close to me are worried. They think I may be going off the deep end. They might be right, but I feel compelled to explain why I’m so scared about the world today. We are headed for an economic collapse unlike anything the world has ever seen. Yes I understand I sound like Chicken Little. I can’t say when the collapse will hit us, but I have a pretty solid prediction as to how it will happen.

My political views have been focused for several years now on a simple three word phrase: Stop Wasting Money. At first this was not scary. I was just pointing out examples of government wasting our money.

It’s risen to a different level. I look at the federal budget and I’m terrified. There are some simple numbers that make this clear to me.

At the current rough interest rate of 2%, the federal government spends about $400 billion a year just on interest payments. That’s one-sixth of revenue. Historically rates on government bonds have been more like 5% or even much higher.

Here is a chart, showing the yield on 10-year treasuries over the past 50 years or so: 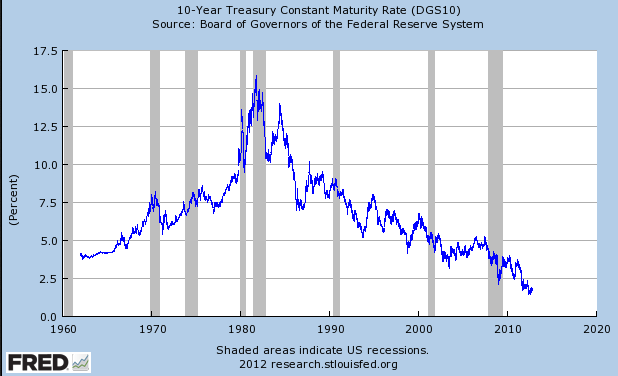 So it’s not hard to imagine that interest rates could go back to 5%. And if they did, that would mean the federal government would have to pay $1 trillion a year in interest payments on debt of $20 trillion.

Some believe our deficits result from a revenue problem. But federal revenue in 2012 is about as high as it’s ever been even though we are having serious economic problems. 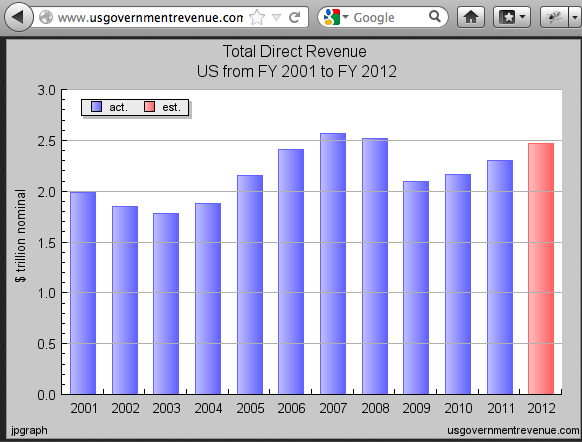 There are some who fantasize that revenues will rise as the economy recovers from the recession. Even on their rather optimistic assumptions, the deficits will continue to be $600-900 billion a year through 2017 if not further.

But the deficits and are not what’s ultimately going to break us. Rather it’s how the government is responding to them. The government, via the Federal Reserve, is printing money. The chart below shows how much money has been injected into the economy by the Fed. 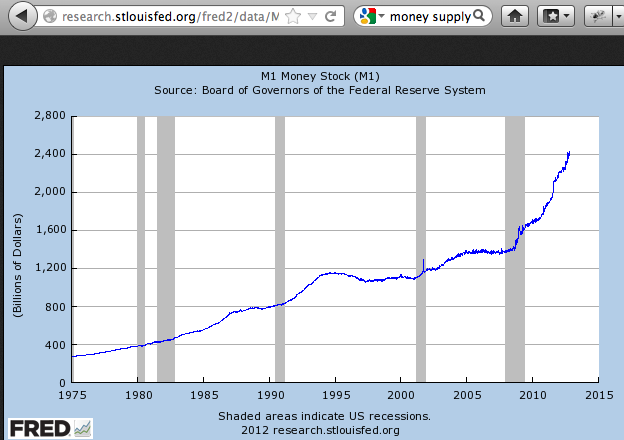 Those who follow the climate change controversy may notice how much this looks like a hockey stick. The Fed has gone on a binge of money printing. Since 2009 it has nearly doubled the money supply. It’s not going to stop – it can’t. If it stops printing money then interest rates will go up – and the interest payments on the debt will skyrocket.

So it will continue printing money, pushing us toward hyperinflation (read Wikipedia on hyperinflation to get a more complete understanding). It’s impossible to say when hyperinflation will kick in. It could start next week or in 10 years. But it is inevitable at this point.

Hyperinflation starts with regular inflation. When the inflation rate gets high enough, people start to plan ahead for it. They begin to raise prices, or demand higher wages, in anticipation of the price increases that are coming. It’s a vicious cycle.

As that Wikipedia entry puts it:

Hyperinflation results from a rapid and continuing increase in the supply of money, which occurs when a government prints money or creates credits in bank accounts, instead of collecting taxes to fund government activities.

There’s a lot of cash being held, both in cash itself and in bank accounts. There’s also reports of large sums of money held by corporations overseas. Politico suggests that tax changes might lead to that money being brought back to the US, “adding an infusion of cash into the economy.” But more money in the economy puts more pressure on prices to go up. That event may be what kick starts the hyperinflation.

Imagine that you have $100,000 in the bank. If inflation hits 10%, your $100,000 will have 10% less value in a year. You might decide it’s better to take the cash out of the bank and buy something that retains its value. It might be gold or silver coins, real estate, or things that have a useful value to you like a bicycle, tools, home improvements, a new TV, etc. You’ll get more out of the money by spending it now rather than later, because the price of those things will go up if you wait.

As people rush to spend the cash they have, that increases demand even more and puts further upward pressure on prices. From Wikipedia again:

Such rapidly increasing prices cause widespread unwillingness of the local population to hold the local currency as it rapidly loses its real value. Instead they quickly spend any money they receive, which rapidly increases the velocity of money flow, which in turn causes further acceleration in prices.

And then government makes things even worse. Inflation also raises prices for the government, but government is insatiable. Rather than recognize the problem and cutting spending to put the brakes on inflation, it will print more money, faster and faster, so that it can continue to buy what it wants. Wikipedia again:

Hyperinflation causes massive economic damage – the economy stops functioning normally. Many of us pay for many things with credit cards, and we then pay the credit card bill 30 days or so later. If inflation hits 100%/month (there are much worse examples), then the credit card company would receive money worth half of what you spent. Credit cards as we currently know them would cease to exist. Utility companies would go out of business because they would be unable to match what you pay them with the cost of the commodities used to fuel the power plants. That means the power would go out. Any product transported over a distance would have to be bought with cash on the spot, rather than ordered for shipping.

We should not forget that one of the worst examples, hyperinflation in 1920s Germany, is perceived to have been a factor leading to the rise of Hitler and the Nazi Party.

But that’s not even the worst of our current situation. Past examples of hyperinflation were mostly limited to one country at a time, usually small countries. The United States is not only the world’s largest economy, but the US Dollar is the world’s reserve currency. The entire world depends on a stable dollar. And we’re not the only country in trouble. Europe also faces a debt crisis with pressure to print money. Japan has a bigger debt problem than we do. So it won’t just be one country. The whole world is going down.

What’s going to happen when, as preppers like to say, we get to SHTF (when the proverbial Shit Hits The Fan). The food production and distribution system will fail. There will be no food on supermarket shelves; no gas at the gas stations; no utility companies to provide electricity, perhaps even no water. Social order will break down, with massive violent riots, looting, and more. Will the chaos last weeks, months, or years? Will we find a way to fix it while preserving some semblance of our current way of life? Or will we fall for a charismatic leader who will make things even worse?

So I’m scared. I think I have good reasons. I hope some of my friends, or others, will persuade me that I’m wrong. But if not, I hope you’ll all accept the new me. I’m still enjoying what we have now, but I can’t help thinking about what’s coming. Despite the gloomy nature of this post, I’m still optimistic that most of us will get through it and perhaps even be stronger when we return to some kind of normalcy. We may be going downhill, but I can’t help trying to enjoy the ride.

A couple of other notes: While I might be a bit obsessed, there are plenty of others much further over the edge. They are planning for all kinds of scenarios, such as an EMP blast wiping out all electronic devices and the electrical grid. Some believe that certain powerful families (the Rothschilds are the most popular target) control the world, or there’s some alien race manipulating the system. They’re stockpiling a year’s worth of food and water; firearms and tens of thousands of rounds of ammunition; and setting up bug-out bags, vehicles and locations. There’s even a TV show about them: Doomsday Preppers. Are some of them crazy? Maybe. But maybe some of them are right.

Also, considering the timing of this post, I should note that I’m not referring to the presidential campaign. It doesn’t matter who wins. None of the remaining candidates – not even the third parties – have any credible plan that would change the path we’re on.