In today’s Wall Street Journal we see a further sign of hyperinflation. Now the Japanese are printing money, to keep up with other countries. This is just one more step toward global hyperinflation.

The world has seen hyperinflation before. It generally happens in one country at a time, with little or no connection to other countries. But what’s coming this time is different, something the modern world has never seen. In typical hyperinflations, the government of a single country facing economic crisis begins printing money to pay its own bills. This is usually the result of flawed economic policy within that one country, often involving runaway government spending.

Today we see the same failed policies happening in country after country. Several European countries are on the brink. Japan faces shockingly high government debt. The US, of course, is deep in in its own hole of both government borrowing and unfunded liabilities for Social Security, Medicare and more.

We are heading toward global hyperinflation. Multiple central banks are printing money with reckless abandon. It’s not just the US. We see it in that headline above from Japan. We saw it January with Switzerland (mentioned in this earlier post on hyperinflation). The European Central Bank is in, and so is the Bank of England. The Chinese are printing money, some say faster than everyone else. The race to the bottom is on and it will only accelerate.

Unlike the past, the consequences of global hyperinflation will not be limited to just one country. They will be widespread. The world’s major currencies are going to collapse, devastating Europe, North America and Japan. There may be safe havens, such as parts of South America, Australia, and China. But these places are in many ways dependent on what happens in the larger economic powers. China and Japan each hold over $1 trillion in US public debt, and likely hold similar amounts of European debt. When these assets become worthless, it will cause massive disruption to Asian economies as well.

Global hyperinflation will cause the gas pumps to run dry. Supermarket shelves will go bare. The system of transactions underlying these basics of modern life will collapse because the seller will not take worthless currency in exchange for commodities that have real value. Our highly complex modern societies will become unsustainable without reliable currencies. BitCoin won’t work either, because the electricity will stop flowing. 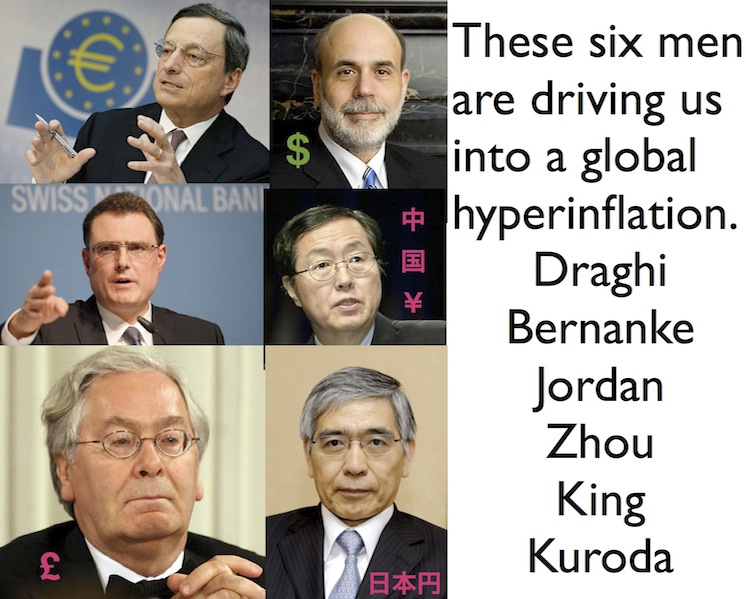 Gold and silver may serve as currencies to an extent, but a one-ounce gold coin is currently valued at roughly $1500, and a silver coin at $30. How do you buy a loaf of bread with that? How do you make change? There are not enough of these coins out there to serve as a reliable currency for billions of people. Perhaps the only reliable currency will be ammunition, with a typical round being worth about a dollar today and with large quantities of ammo in circulation, at least in the US. But even that will not keep the lights on nor the gas flowing. Transactions will be reduced to barter, along with some gold, silver and bullets as currency. But this approach is not technically sophisticated and will not sustain the modern digital world.

Right now it looks like a slow-moving train wreck. When global hyperinflation kicks into gear, the train will accelerate rapidly. Keep your eyes open and be ready. And let’s be hopeful that when things settle down after the collapse, we can rebuild our world so that we never again let our governments engage in runaway spending. We have blown it this time around. It’s too late. Those of us who survive what’s coming must be vigilant when we get the chance next time.