A friend alerted me to the Terry McAuliffe campaign for Governor of Virginia. Motivated in part by this National Review article, I decided to look more into his campaign.

Reading the McAuliffe campaign website (or at least the mobile version) I was struck by the campaign photos. 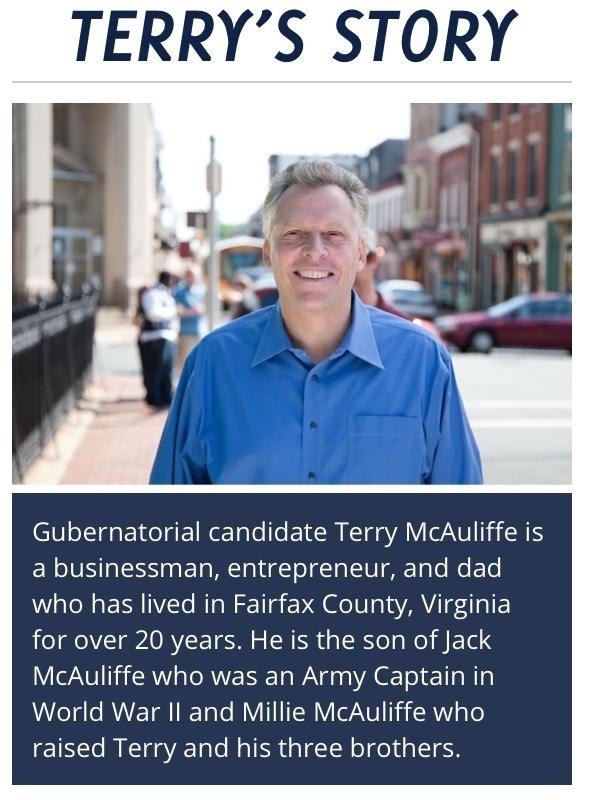 They say a picture is worth a thousand words but I’m not getting that here. I see a guy standing on a street in what might be a Virginia town. It’s obviously a professional photo because he’s in focus and the town isn’t. Which makes me wonder if its actually in Virginia.

But what really caught my eye on this page is the text. His story is told in two sentences. And the second sentence isn’t really about him.

For the rare Virginian who might be interested, there is more to Terry’s story than that, told in a bit more depth at Wikipedia.

The picture that grabbed me and inspired this post is on McAuliffe’s Issues page. 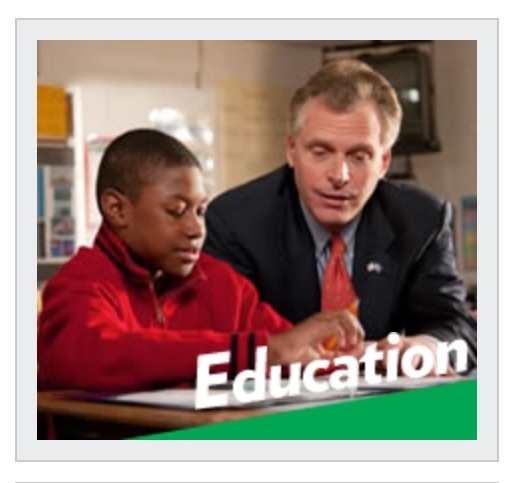 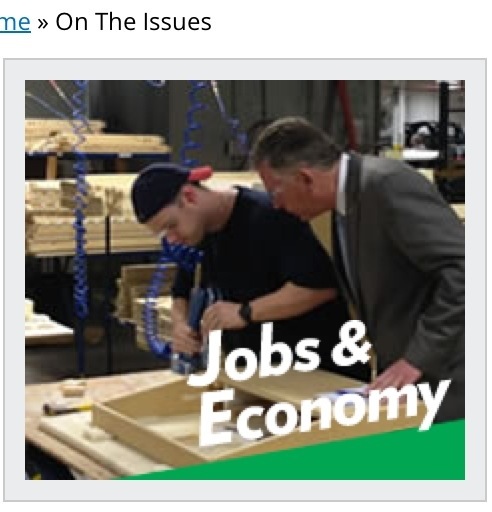 See Terry talk to a guy on a work break. 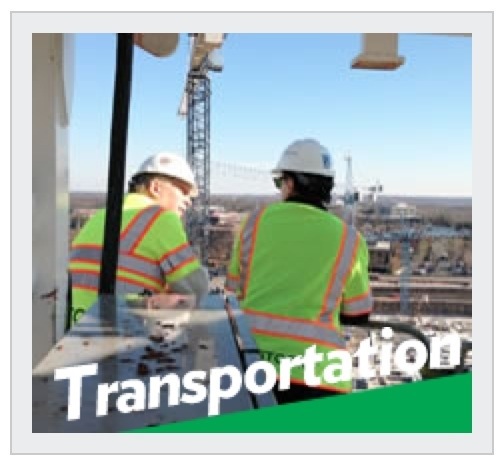 What does the above picture have to do with transportation? Beats me. But I guess it shows that Terry understands the working Joe because he can pretend to have a conversation with one (or an actor pretending to be a worker) in a photo op.

Then we’ve got Terry next to the back of an ambulance. 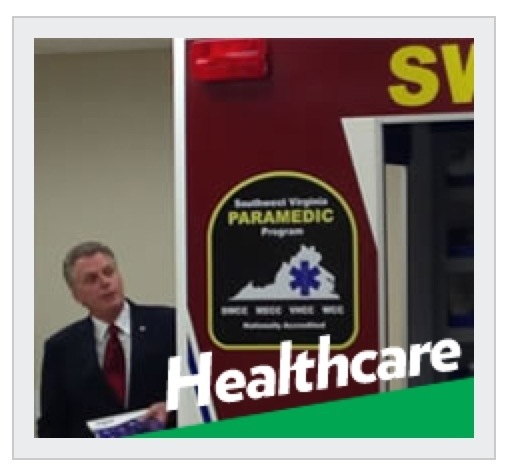 So we know he understands all of the important healthcare issues because he did a photo op next to a piece of equipment.

And of course Terry can talk to a guy wearing a hard hat. 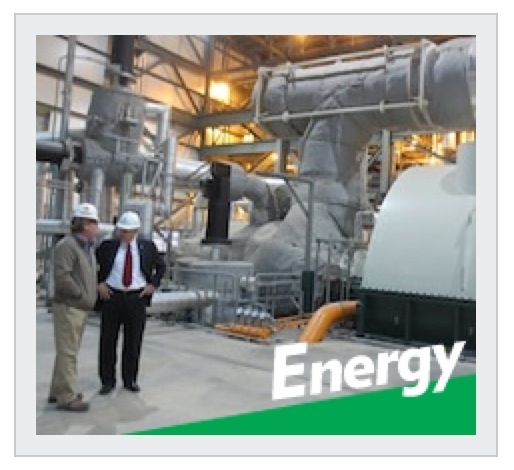 I’m not sure what the setting is for this photo. It looks like an industrial site that uses a lot of energy. I hope it’s not a power plant because that baby looks like its gonna blow up.

Next he has a photo with women, about women. Are they his wife and daughters? Actresses? We will probably never know. If it is family it’s an odd setup. And of course his commitment to family is legendary. 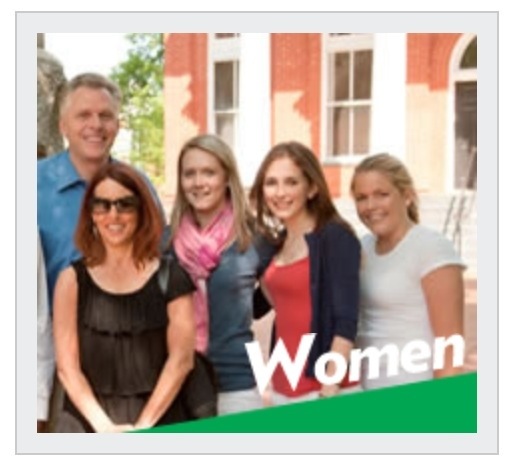 Clicking on that photo takes you to his incredibly deep policy statement about women: 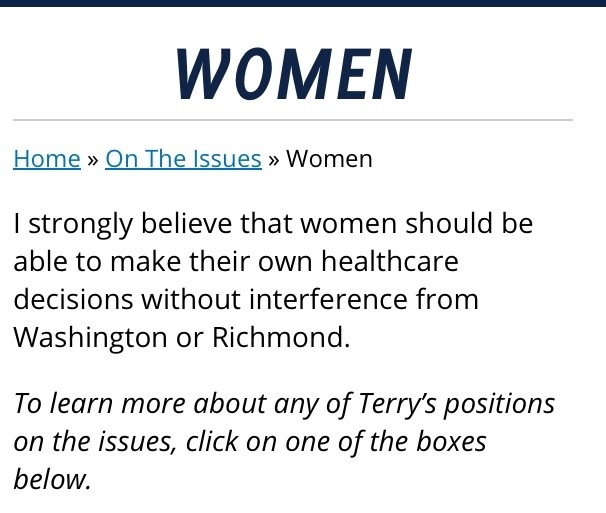 A whole sentence? Seriously?
“I strongly believe that women should be able to make their own healthcare decisions without interference from Washington or Richmond.”

This is so vague it could be a Tea Party statement against Obamacare.

You might think there’s more depth in the boxes below but you’d be wrong. One box isn’t even about Terry’s positions – it’s a hit piece on his opponent.

And then there’s Terry with a guy wearing a Vietnam hat, and a McAuliffe campaign shirt at what appears to be a campaign event. Not a veteran’s event. The guy might be a veteran, probably. My favorite part of the pic is the girl looking at her phone in the background.

Of course veterans are primarily a federal issue. So Terry’s issue position about the VA is utterly empty. The Governor has no power to do anything about it.

And finally we have the funny moment. I decided to click the En Español button to see how his site looks in Spanish. Here’s what I got: 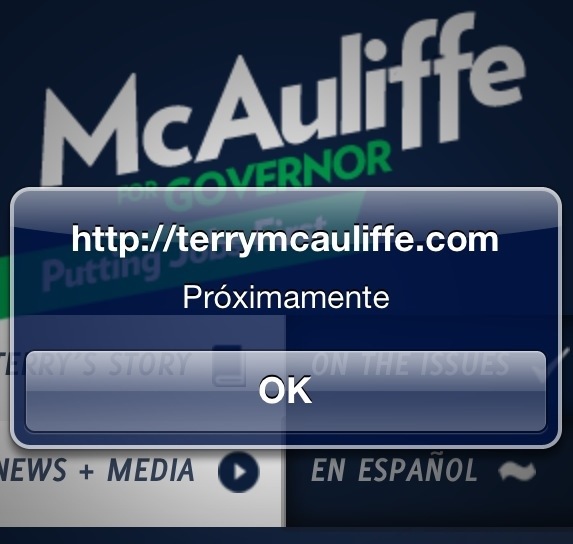 Próximamente means shortly or soon. Don’t worry Spanish speaking Virginians. Terry will get to you soon. At least he cares enough about you to tell you, in Spanish, that he doesn’t care about you.

To be clear, I’m not endorsing his opponent. I haven’t bothered to look him up and I probably wouldn’t like him if I did. I was just so struck by the inauthenticity of this campaign site that I had to say something.

In the “So Stupid It Must Be True” category, the State Department spent over $600K advertising on Facebook to get Likes.

Warren’s new book is on sale this week.

Fair DUI: Stay safe and sane in a world gone MADD includes practical strategies to avoid drinking and driving, advice on how to handle police encounters, and policy suggestions to protect the innocent and make our roads safer.

Get the details at FairDUI.org. 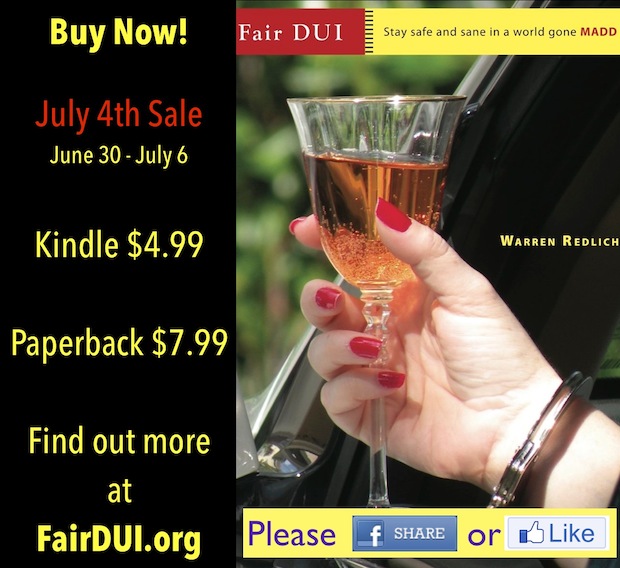 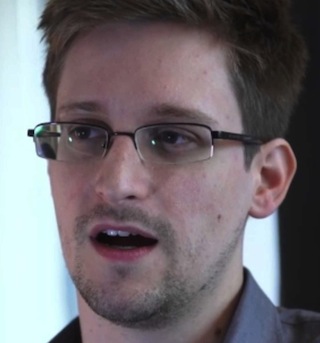 Charges have been filed against Edward Snowden in the US District Court for the Eastern District of Virginia. Snowden is the world’s most famous fugitive of the moment. The most comprehensive reporting on his story can be found at The Guardian, thanks primarily to Glenn Greenwald.

At the outset, it’s difficult to fully analyze the charges because the affidavit referred to in the Complaint remains sealed. The details of what Snowden did have been highly publicized, but it is of course possible that there is more to the story. Going on what we do know, dismissal is appropriate.

Here is the charging section of the complaint:

The first section Snowden is accused of violating is Title 18 of the United States Code, Section 641 (18 USC 641). This is the language that describes what’s prohibited:

Whoever embezzles, steals, purloins, or knowingly converts to his use or the use of another, or without authority, sells, conveys or disposes of any record, voucher, money, or thing of value of the United States or of any department or agency thereof …

This is the federal “embezzlement” statute. Reading from the Justice Department’s own website, it is clear that this statute does not apply to Snowden because a key element of the offense requires that the alleged thief “acted with the intent to deprive the owner of the use of this property.”

There is no indication that Snowden has prevented the federal government from using any “record, voucher, money or thing of value” he may have taken. Indeed, there’s no suggestion that he took any money or vouchers, so those are out. He may have taken records, such as the sealed FISA court order, but obviously the government still has access to that document. It’s also unclear what value if any would be placed on anything Snowden took. If the value is less than $1000, the maximum sentence is one year and people facing charges like that routinely get no jail time.

Considering the magnitude of the charge (larger offenses carry a maximum sentence of ten years), if the value was greater than $1000, that should have been included in the complaint itself. As such, it is a small enough offense that it would not normally justify extradition.

Before getting into the next statute, it should be noted that the same statute purports to criminalize the journalist:

Whoever receives, conceals, or retains the same with intent to convert it to his use or gain, knowing it to have been embezzled, stolen, purloined or converted

(d) Whoever, lawfully having possession of, access to, control over, or being entrusted with any document … relating to the national defense, or information relating to the national defense which information the possessor has reason to believe could be used to the injury of the United States or to the advantage of any foreign nation, willfully communicates … the same to any person not entitled to receive it ….

Breaking this down, it is clear that Snowden had access to certain documents, and that he willfully communicated them to journalist Glenn Greenwald. However, it is far from clear that these documents related to the national defense, nor that Snowden believed they could be used to the injury of the United States.

The key issue here is that there is no definition of the term “national defense.” I did some searching this morning and was unable to find such a definition in the US Code. The term is used so broadly in general that its meaning is vague. When a law’s meaning is unclear, it can be found void for vagueness.
What Snowden did is show the American people that our government is spying on us. It’s too much of a stretch to put this within the meaning of national defense.

Also in the statute we have a clear definition:
The term “communication intelligence” means all procedures and methods used in the interception of communications and the obtaining of information from such communications by other than the intended recipients;

So here we see that Snowden did communicate, knowingly and willfully, classified information concerning our government’s communication intelligence activities to a journalist (who presumably was not authorized).

The problem is that what Snowden disclosed was not prejudicial to the safety or interest of the United States. Rather, the government’s activities are the real threat to our country.

Media reports inaccurately indicate that Snowden was charged with espionage. What’s almost funny, though certainly not to Snowden, is that Snowden is not accused of spying at all. Rather this third charge shows that he is accused of exposing that our government is spying on us.

And one last thing – at bottom the document states: “Venue is proper pursuant to 18 USC 3238.” That is false. Venue in Virginia is actually improper.

While we’re happy if you buy it now, you may want to wait a few days. We intend to promote it starting June 30th with a lower price for a few days. The paperback should also be available soon, and it will also be listed at a promotional price for the same period.

Keep track of the book on the Fair DUI website.